The traditional crafts of crochet and knitting have become one of the hottest movements in modern art. We follow a few International artists and knitters as they bring yarn to the streets and into our lives in new ways. Starting in Iceland, this quirky and thought-provoking film takes us on a colourful and global journey as we discover how yarn connects us all. Starring: Barbara Kingsolver, Cirkus Cirkör, Olek Tinna Toshiko.

Our Kaffestugan will be open before and after the film for coffee, pastries and open faced sandwiches. 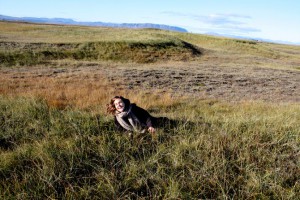 ABOUT UNA: Una Lorenzen is an Icelandic filmmaker living in Montreal, Canada. She received her MFA in experimental animation at California Institute of the Arts in 2009. Her films have traveled widely to festivals and venues and she has worked on award winning films and Emmy nominated series. Una creates animation and motion graphics for music, story and educational content of all sorts. Using mixed media techniques she aims to create a unique visual experience in each project.