Anna Jalkéus and Aaron Dutton interpret Swedish folk songs and hymns in an atypical duo setting with pedal harp, voice, and saxophone. Well-known melodies and folk-ínspired compositions will be played in new, unique arrangements that combine intuitive listening and improvisation. Music and words are delivered with honest sincerity to create a beautiful and soaring soundscape. 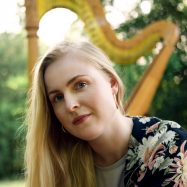 Anna Jalkeus is a Swedish singer, harpist, and composer based in Boston, MA, known as a powerful, creative musician who writes genre-bending music with fearlessness and originality. She has received several national awards such as the JEN Young Composer Showcase, Swedish Monica Zetterlund and Ted Gärdestad awards, STIM Scholarship (Swedish ASCAP), and a 2017 Downbeat Award. Her debut album “Estrogenia” was released in 2018. Doc Wendell of LA Jazz Scene called it “a compelling debut recording by a fascinating artist and equally compelling group”, and Alison Young gave it 9/10 in HarpColumn. Anna has performed in major venues in US Cities such as NYC, Chicago, Dallas, and Kansas City, as well as internationally in Hong Kong, China, Germany, Norway, and all over Sweden. She holds a bachelor’s degree from Royal College of Music, Stockholm, and an Artist Diploma from University of North Texas. 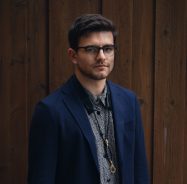 Aaron Dutton is a saxophonist and composer from Santa Barbara, California who operates primarily in the world of jazz and improvised music. Aaron’s diverse musical career as a bandleader and prolific sideman has taken him around the world with various projects, including tours in Australia, China, and performances at well known venues in New York City such as Birdland, The Jazz Gallery, and National Sawdust. During his undergraduate degree, Aaron was a member of the Grammy-nominated One O’Clock Lab Band at the University of North Texas, and is currently pursuing his Master’s degree at the New England Conservatory in Boston, studying with Jerry Bergonzi, Donny McCaslin, and Miguel Zenon.